It has been a big year for our small community. While much of parish life has followed familiar patterns there have been some new shoots and events to celebrate. At the same time we have had to deal with some changes that we were perhaps not quite ready for and experienced some deep losses.

HIGHLIGHTS
Wake Up or Wither?
The year really got going in March with a talk by Michael Kelly SJ who provided a pithy history of the Church in Australia and challenged us to think about how the Church might need to change to thrive this century.
Michael Kelly’s talk was one of a series organised by the Faith Formation Group. The second talk, on Palm Sunday, was by scripture scholar, Brendan Byrne SJ, on the meaning of the Holy Week scriptures. And the third talk was by theologian, scholar and teacher, Sister Margaret Beirne RSC, titled, ‘Communal apostolic discernment: Ignatius’ gift to the Church.’
The Faith Formation group didn’t stop at stimulating talks. They also hosted reflection groups during Easter and Advent, reflection days for the beginning and end of the year held at Canisius as well as a week of mindful prayer in October. It seems Michael Kelly’s theme of ‘Wake Up or Wither?’ served us well all year.

125th Anniversary
Sydney’s history books will record that the 125 Anniversary of St Canice, celebrated on 4 May, was perfectly choreographed and proved that the little parish on the fringe of the city has many friends. While many people contributed to the day’s success, special mention must be made of the long and exacting effort Michael Musgrave put into the event. It simply would not have happened without him.

Not to be outdone…
The Sisters of Charity celebrated 175 years on ministry in Australia and this includes their unbroken close association with our parish.

A mustard seed to a garden
What started as a novel idea during the parish renewal process is now a very real rooftop garden. The garden project is remarkable for many reasons; from Rob Caslick’s entrepreneurial energy to the new network that has quickly grown up around it, the crowd-sourced funding support it has attracted, right up to the celebrity chefs wanting to be involved.

The project all happened very quickly. In just this year there has been planning and DA approval, Christine Manfield’s fund-raising dinner, building works completed, experts recruited and planting and volunteer induction sessions underway. On top of all that, right now there are zucchini cereals, sandwiches and ice-creams to be enjoyed.

Church as gallery
Who can forget Erika Diettes powerful portraits that graced our church for several weeks in May and June? Not only was St Canice a fitting venue for this exhibition but it seemed to make perfect sense that our part of the city might be the place to experience images of suffering, hardship and grief. As part of the Head On photo festival it meant many people who might otherwise not know of St Canice paid us a visit.

Regular rhythms continue
Quite apart from the highlights mentioned above much of parish life takes the form of daily, weekly and seasonal rhythms. Our mix of liturgical styles continues to cater well for most people and our servers, collectors, readers, prayer writers, greeters, cantors, choir, and musicians didn’t miss a beat all year.

The weekly meditation group continued to meet and the Easter reflection group also met again. Many other small groups, such as, AA continued to use the church hall for their meetings.

The parish’s Pastoral Council, Finance Committee and newly formed Kitchen Committee met regularly throughout the year and all three are preparing to take on a bit more next year.

The kitchen itself soldiered on with its highly autonomous teams of volunteers. The limited support they do receive is vital and so special thanks goes to Helen McPake, Helen Campbell and Elizabeth for navigating a couple up-set days.

For the numerically minded, the parish saw 28 baptisms, 10 weddings and 17 funerals.

Losses
Of the 17 funerals held in the parish there were three that were felt profoundly by parishioners.
Such a central part of parish life for so long, it was no surprise that Mick Lordan’s passing was felt by all. For many, Mick’s funeral was incredibly moving.

Like Mick, Laurie Kennedy was a fixture, and the passing of these two men has been the end of an era in many ways. It is hard to imaging there will be others who could give the time and energy these two gave to the parish.

Robert Barnes is also deeply missed. A man whose own commitment to the Gospel challenged and encouraged us all.

A New Year
The Pastoral Council wants to flag that in the first quarter of 2015, probably around late February or early March, the parish will host an Outlook Workshop; a gathering of parishioners to consider some direction setting ideas and possible changes. Please keep an eye out for more on this in the new year.

Click here to read A Letter from Caroline Coggins, Chair of the Parish Pastoral Council

Click here to see the photos in our Parish Wrap.

Click here to watch the video from the Celebratory Mass for our 125th Anniversary last May. 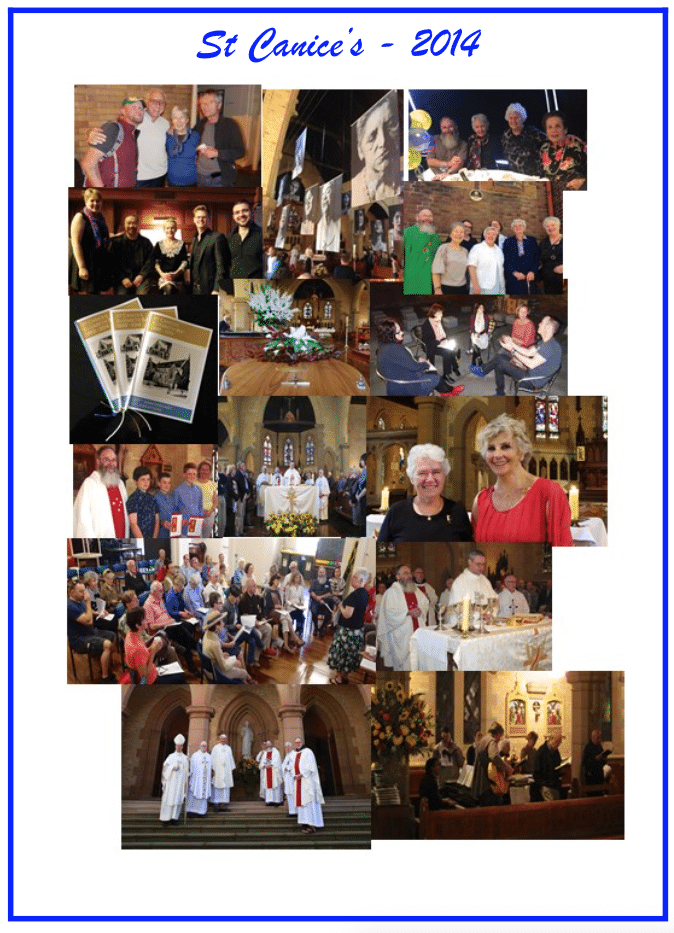