While the wider Jesuit community is ‘nation-building’, we at St Canice’s have been making what is seen by the people in Railaco as a monumental commitment to their welfare, healthcare, nutrition, and educational needs of their children since 2004, and we are committed to continue.

We would like you, our St Canice’s Community, to better understand the activities in Railaco that are supported by your generosity. 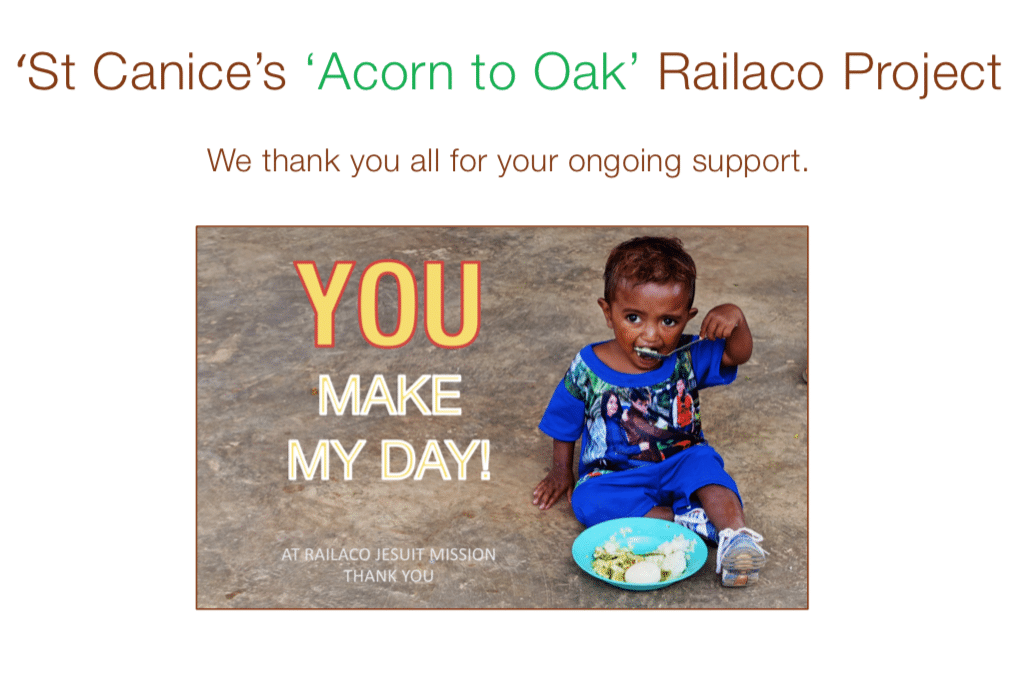 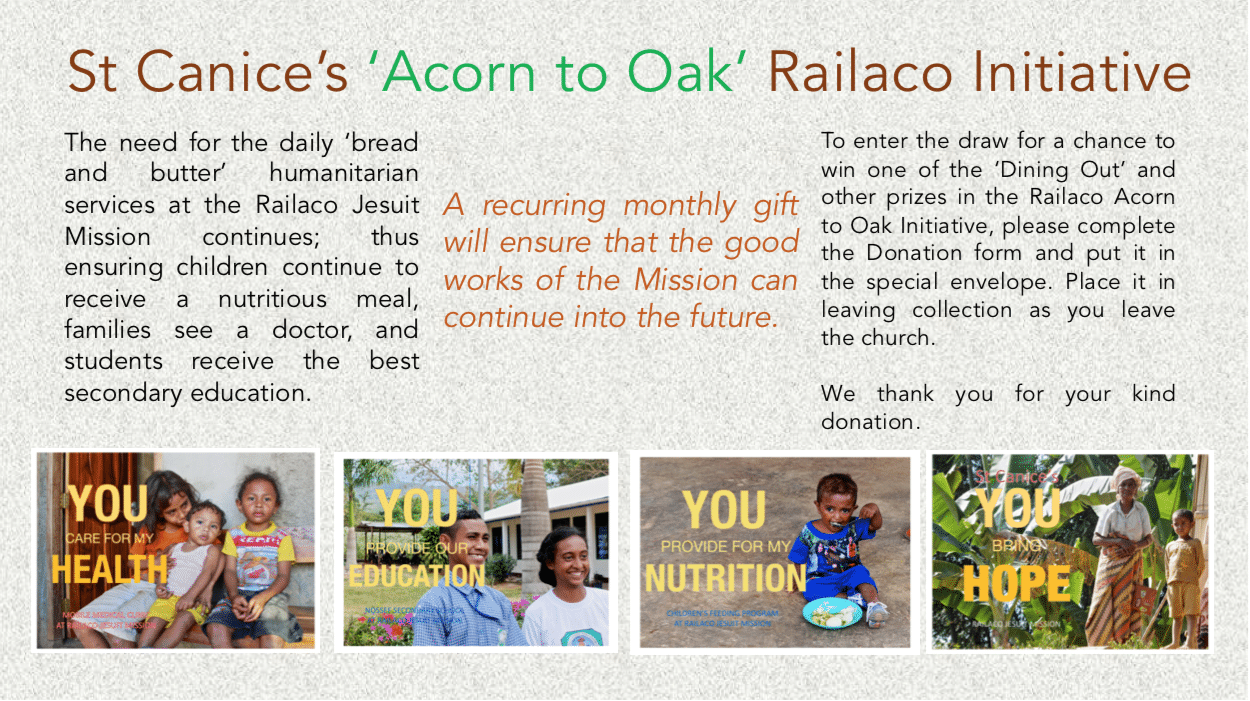 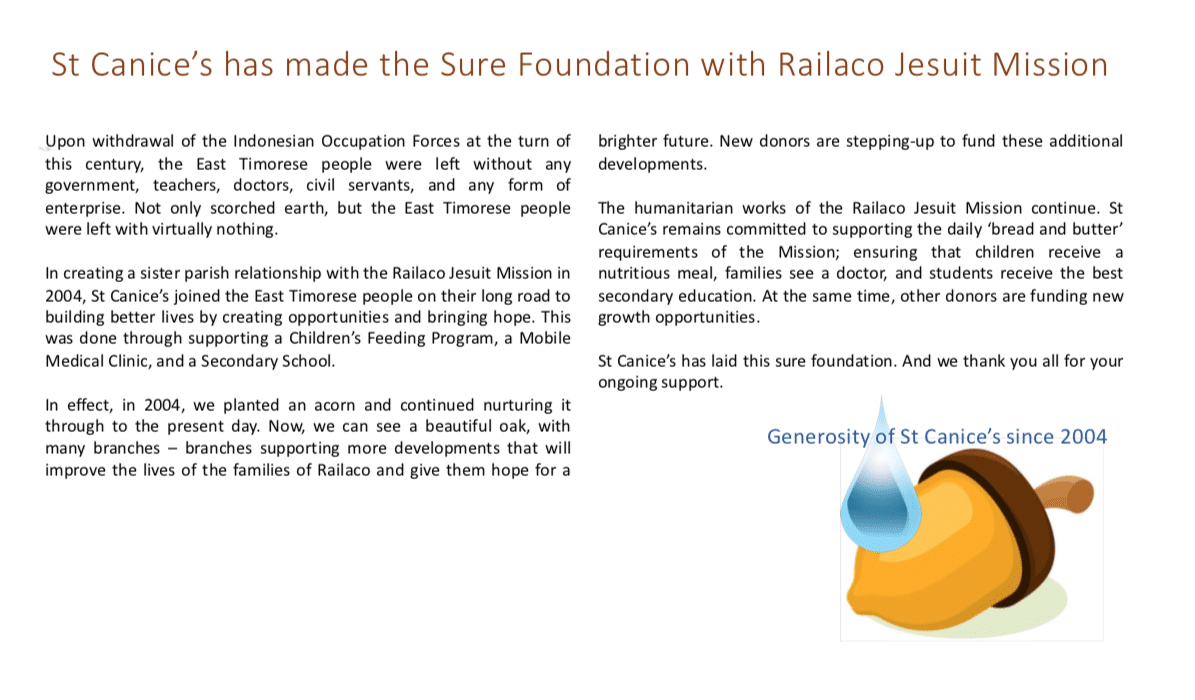 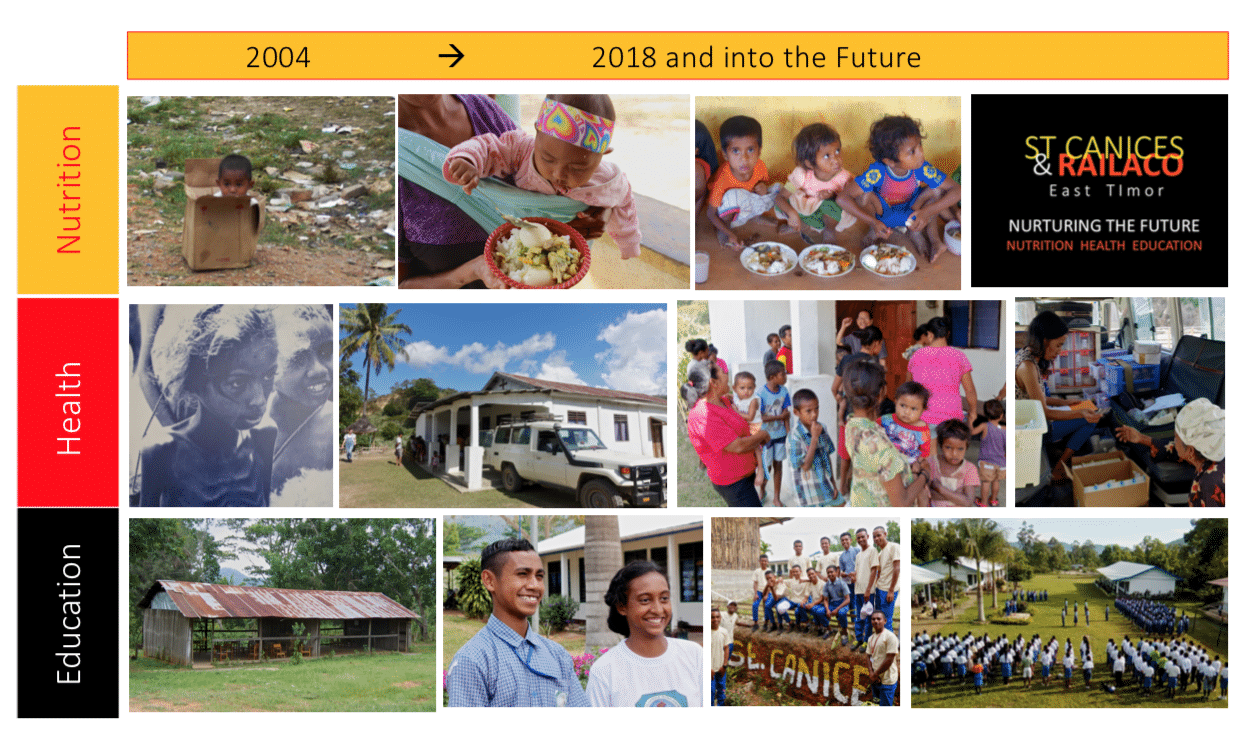 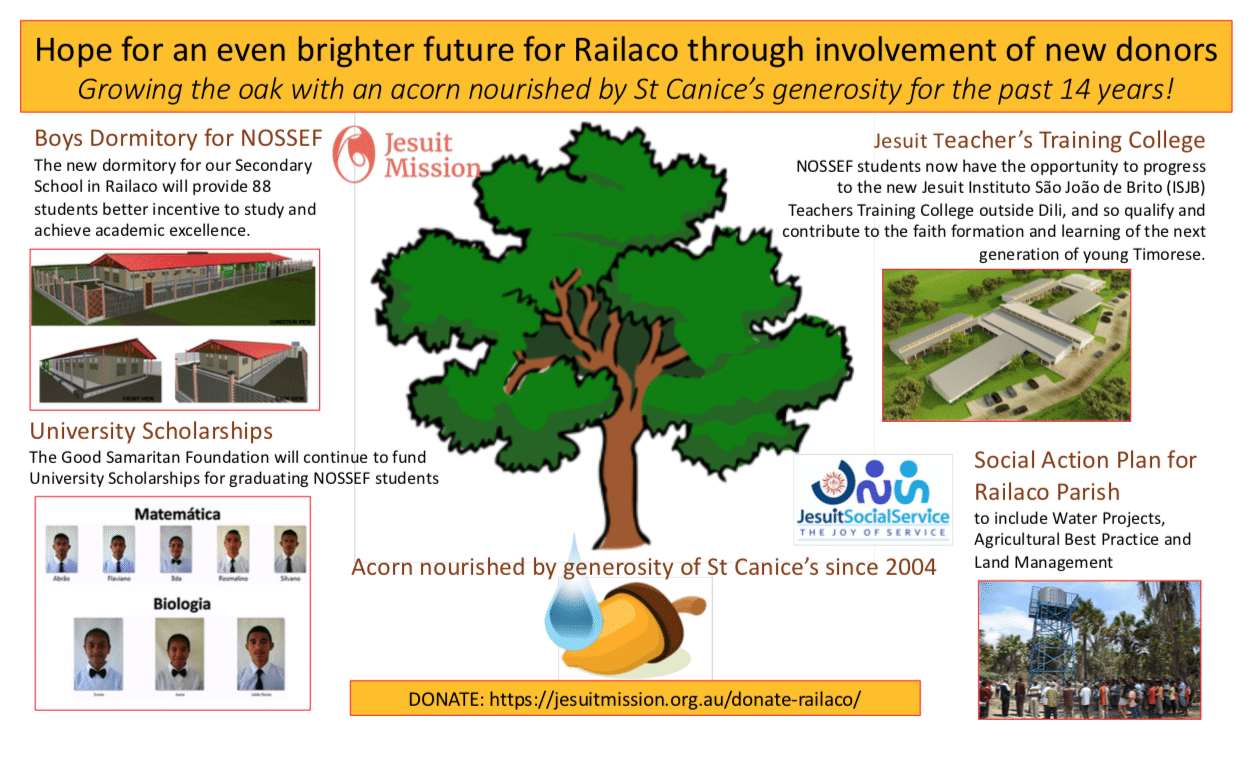 A very special relationship has existed between Australia and Portuguese Timor since World War II when brave Timorese protected, provided food, and saved the lives of the remaining six hundred and seventy Australian soldiers of the ‘Sparrow Force’ as the Japanese invaded their country in World War II.

This generosity of spirit of the Timorese people was not lost on a group of Australians from St Canice’s Jesuit parish in Kings Cross Sydney when they visited East Timor sixty years later, shortly after Independence was granted. This small party of Australians was looking to see ways in which they could stand in solidarity and contribute to the life of the now impoverished people; gentle people so afflicted by centuries of colonisation, by brutal invasion and occupation by Japan and Japanese reprisals for aiding our Australian troops, by their own civil war, and having endured the Indonesian occupation.

Motherly instincts ignited Sydney company director and grandmother Sue Crabbe’s passion for doing something about the dreadful malnutrition and undersized babies she saw running around in the villages. Sue said,

“It’s incomprehensible seeing goats that aren’t being milked and chickens producing eggs, such great sources of protein, that aren’t being used to feed the children. It’s so confronting meeting women who don’t have the basic knowledge that might keep their child alive”. 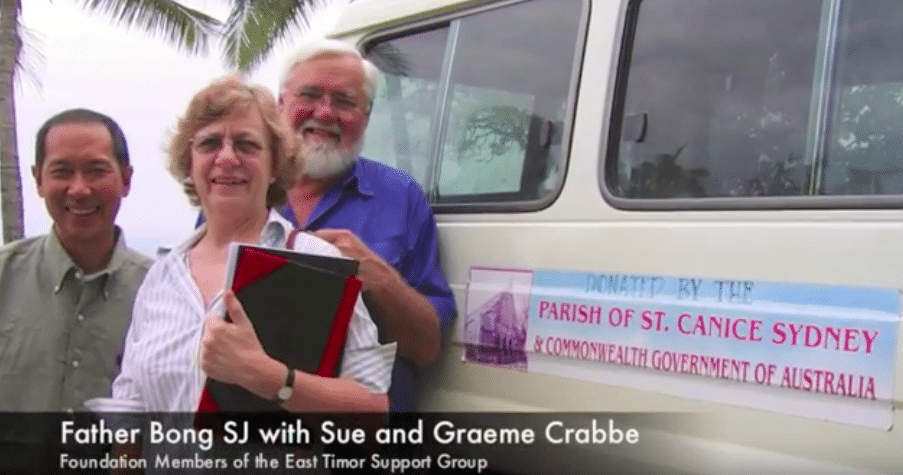 The opportunity to provide education of a most basic nature, coupled with finding a way to provide a nutritious meal for these children could not be ignored. The St Canice support group joined in solidarity with Filipino Jesuit and medical doctor Fr Martin Bong at the Railaco Jesuit Mission in the mountains outside Dili. They committed to provide funding to establish a Children’s Feeding Program and a Mobile Medical Clinic.  A second-hand 4WD sourced from the Australian Defence Forces was purchased, and very shortly thereafter children were being fed, and people in remote mountain villages had the services of a doctor, and medicine for the first time.

Another strong suggestion from another enthusiastic Jesuit parish priest and engineer was the need for a school. The support group returned to Sydney emboldened by Fr Hermes claim that with $10,000 he could build two classrooms. Months later, the new Railaco school was open! The man was an enabler. The Canice’s group – ‘do-ers’!

An open shed, with rusty corrugated iron roof and crooked posts that housed the first elementary school is long dismantled. Children would walk for up to two hours a day to come to school and didn’t bring any food or drink with them for the day. Sister Rita, a Good Samaritan nun, using her experience as a principal in large secondary schools in Australia joined to contribute her expertise and care. Only two months ago, a canteen to provide students, who have walked long distances, can now provide these two hundred children with a nutritious daily meal.
Another of the support group from St Canice’s, Michael Musgrave, writes about his recent experiences bouncing along ungraded rocky ridges and stony river beds with Fr Bong’s mobile medical clinic He says,

”Arriving at the first community, I see a long line of mothers with children on well-suckled breasts; many still in their teens. Others, including the elderly with rough-hewn walking poles for support, have walked for up to an hour across tough terrain to see the doctor”.

Fr Bong consults; Luzia dispenses medicines from the back of the 4WD, and Joanna keeps the medical records for all the patients, before packing up and driving to the next village. Michael goes on to say:

“The annual funding of the Children’s Feeding Program, the Mobile Medical Clinic and the support we provide to the Secondary School is approximately $70,000.  In the ten years since inception of the special East Timor relationship, the St Canice community has raised in excess of half a million dollars towards these programs”. (Now, in 2018, the amount raised has reached $800,000.) 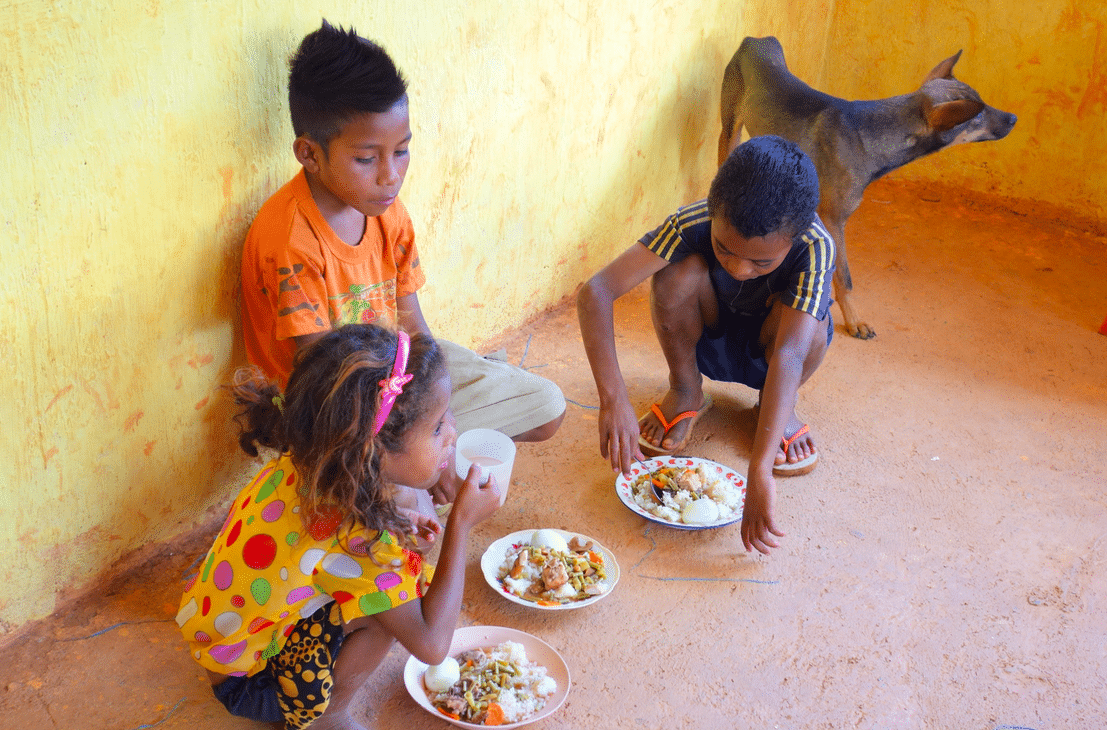 Whilst we will continue with fundraising in the Canice community, your one-off donation will ensure that the amazing work done by all of those at Railaco to aid the East Timorese people can continue to be carried on in the future.

All contributions are tax deductible and are deposited in the Australian Jesuit Mission Overseas Aid Fund. The money is sent to the Bursar of Jesuit Mission in Dili, who ensures that your donations are spent on the programs outlined here.

If you’re interested in learning more about how to become a regular donor and how the money is used in Railaco – please email Michael Musgrave at mmus@me.com.