Sacred Music for the Feast of Christ the King

When we join Sacred Music to the liturgical rite, it becomes an integral part of our solemn liturgy “for the glory of God and the sanctification of the faithful”.

On the Feast of Christ the King, our gifted St Canice musicians, cantor Pascal Herington and liturgical organist, Christine Moriarty, brought Sacred works of Haydn, Mozart, Schubert and Bach to our 10.30 am Mass.

In thanking Pascal and Christine, we also offer special acknowledgement to the other talented soloists – Soprano Anna Sandstrom, Alto Tim Chung, and Bass Javier Vilariño, who made this Feast Day Mass so special.

St Canice’s opened 125 years ago next May with a Haydn Mass; with many dignitaries; with much aplomb. We are a poor church in comparison to those heady early days of the new colony. Hopefully, this past Sunday could well be a foretaste of what we might expect in May 2014 as part of the Quasquicentennial celebrations.

After the Mass, one parishioner tearfully summed-up the experience recalling his late wife always saying, “you’ll know you’re in heaven when you hear the music!” 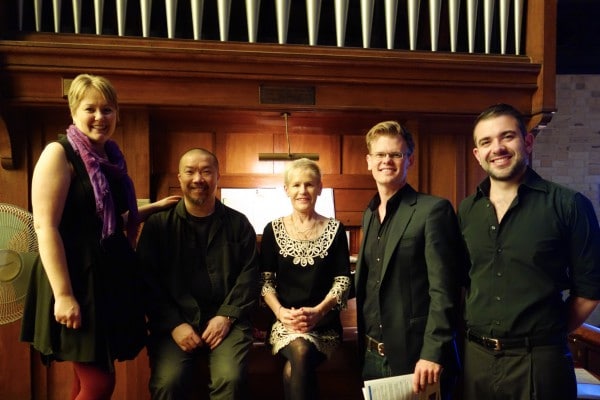 The Video and Audio Tracks for this Mass were captured on a small hand-held Sony DSC RX100 camera.

The ten Audio tracks below are shared to give you the opportunity to re-live the experience, or perhaps to show what you can look forward to on future Feast Day Celebrations at St Canice’s.

Some of these Audio tracks may not be complete. Your understanding is appreciated.

Good morning and welcome to the feast mass of Christ the King. I thought it might be nice to put some of the music you will hear today into context.

The Kyrie you will hear for the mass is from Mozart’s Coronation Mass – written in 1779, after Mozart returned to Salzburg, becoming                Kapellmeister at the Salzburg Cathedral. The nickname of the mass comes as it became favoured as the mass setting used for Royal Coronations in 19th Century Vienna.

The Gloria comes from Missa in Angustiis (or “Mass for troubled times”), commonly referred to as the “Nelson Mass”, written during Napoleon’s conquest of western Europe and northern Africa. On the day of the first performance of this mass setting, Napoleon was dealt a heavy defeat at the Battle of the Nile, at the hands of Horatio Nelson, who now lends his name to this piece of music.

The Sanctus, from another of Haydn’s masses, entitled the “Theresienmesse”. This piece features heavily in quite brilliant soprano solos. This is due to the fact that the Empress of Vienna – Maria Theresa was a very accomplished singer herself. This mass was written for her in 1799.

The Benedictus has been taken from Mozart’s Requiem Mass. This piece is arguably the Mozart famous of Mozart’s liturgical works. It was anonymously commissioned and Mozart died during writing this piece. It is commonly believed that Süssmayr, one of his assistants, finished the work, including the writing of the Benedictus, in the style of the other movements.

Finally, the Agnus Dei has been taken from Schubert’s Mass in C. Schubert was heavily influenced by the work of Haydn and Mozart only 20 years before him. This mass, finished in 1816, would have been performed alongside the other masses you are hearing today.

Finally, during communion, you will hear Ave Verum Corpus, by Mozart. This was also composed by him in the year of his death, based on a 14th Century text from the abbey of Reichenau, in southern Germany.

The text translates to:

Hail, true Body, born of the Virgin Mary, who having truly suffered, was sacrificed on the cross for mankind, whose pierced side flowed with water and blood: May it be for us a foretaste [of the Heavenly banquet] in the trial of death. O sweet Jesus, O pious Jesus, O Jesus, son of Mary, have mercy on me. Amen.

But to begin the mass, we would love for you to be involved. So I will ask you to turn to hymn number 365 in your hymn books. This hymn is based on a Chorale from Bach’s cantata 110 – Gelobt sei Gott. It translates simply to – “Praise be to God”. To help us kick off this wonderful morning, we will ask you to help us raise our voices. The soloists for today are Anna Sandstrom, Tim Chung, and Javier Vilariño, and of course, Christine Moriarty playing our organ.

Psalm – Let us go Rejoicing to the house of the Lord

Praise my Soul, the King of Heaven

The Video and Audio Tracks for this Mass were captured on a small hand-held Sony DSC RX100 camera. The Audio tracks above are shared to give you the opportunity to re-live the experience, or perhaps to show what you can look forward to on future Feast Day Celebrations at St Canice’s.

Some of these Audio tracks above may not be complete. Your understand is appreciated.