For 30 years, St Canice’s Kitchen in Kings Cross has been serving meals to Sydney-siders down on their luck.

Seven days a week, volunteers gather in the non-denominational kitchen to prepare lunch for around 130 people.

Organisers say the shared lunch helps to stave off the social isolation many homeless people face. 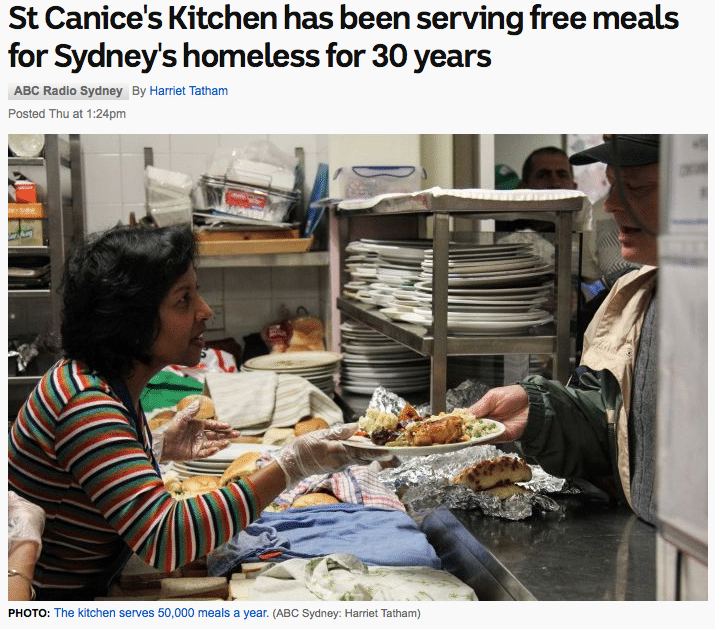 At 10:00am sharp, inside a small soup kitchen in Kings Cross, a dozen volunteers surrounded by donated produce don aprons to prepare for lunch for 130 people.

It’s a big job, but for the volunteers at St Canice’s Kitchen, which for 30 years has prepared meals for those down on their luck, the recipe is familiar.

“I was so surprised that this place even existed, because the food they put out would cost $20 or $30 if you went to a pub,” Michael Coleman said, as he ate Asian-inspired roast chicken, fried rice, a ham and salad sandwich, with cake to come.

Despite being attached to St Canice Catholic Church, the kitchen is non-denominational.

Seven days a week the volunteers, including retired doctors, dentists, graziers and parishioners, serve lunch between 11:00am and 12:30pm to thousands who sleep rough or struggle to pay living costs.

“We hope to provide for the daily needs of the people,” Sister Sheelah Mary, who’s been involved for almost 20 years, said.

“The numbers are getting bigger and bigger.

Click on this link to see the ABC’s coverage of this wonderful milestone for our St Canice community.