Railaco 2017 – The First Letter of Michael to the Caniceians

East Timor is our nearest neighbour 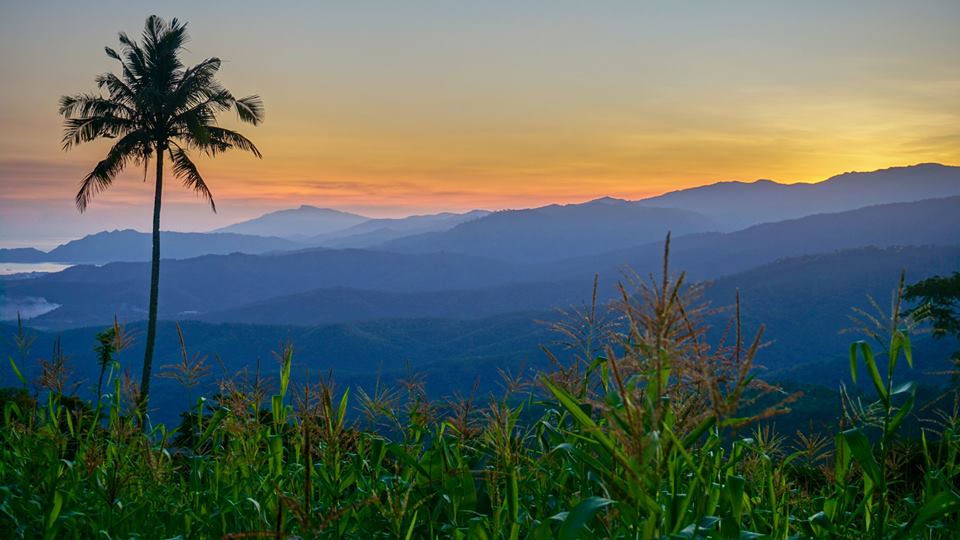 Our Railaco Lead Ambassador, Michael Musgrave, travelled to Timor-Leste to visit the Jesuit Railaco Mission and to meet others in the Jesuit Community in Dili. He travelled with the Program Manager of Jesuit Mission Australia, Angela Ford, and two young volunteers from Melbourne, Karl and Lucy, who accompanied them for part of the trip to photograph and collect material to make a series of short videos. We look forward to sharing them with all Caniceians in the near future.

During Michael’s days in Taibesi Jesuit Residence in Dili, he met with the six students from the Jesuit Schools in Sydney, Riverview, St Aloysius, and Mt Druitt, who were in Timor on an ‘immersion’ experience. They will be in attendance at the three Masses at St Canice’s on the weekend of 29/30 July. This is the weekend that we celebrate the Feast Day of St Ignatius, and a special leaving collection will be taken-up for the works in our Railaco sister parish.

Michael has written an extensive ‘report’ on his trip. He goes beyond sharing what’s going on with the Children’s Feeding Program, Mobile Medical Clinic, and Secondary School, details of which we’re fairly familiar. The aim of this ‘report’ is share more of the ‘back-story’ about conditions and life ‘on the front lines’ that he learned from first-hand experiences over ten days, meeting many Jesuits and speaking to other volunteers.

The Vision of the Jesuits up there is to see a Timor-Leste Church and Nation that is grounded in faith and justice of the gospel, and where the humanisation of life especially youth, women and children is included.You will read in Michael’s ‘report’ how the works of the Jesuits and volunteers allow marginalised families to grow in community, opportunity, and hope. 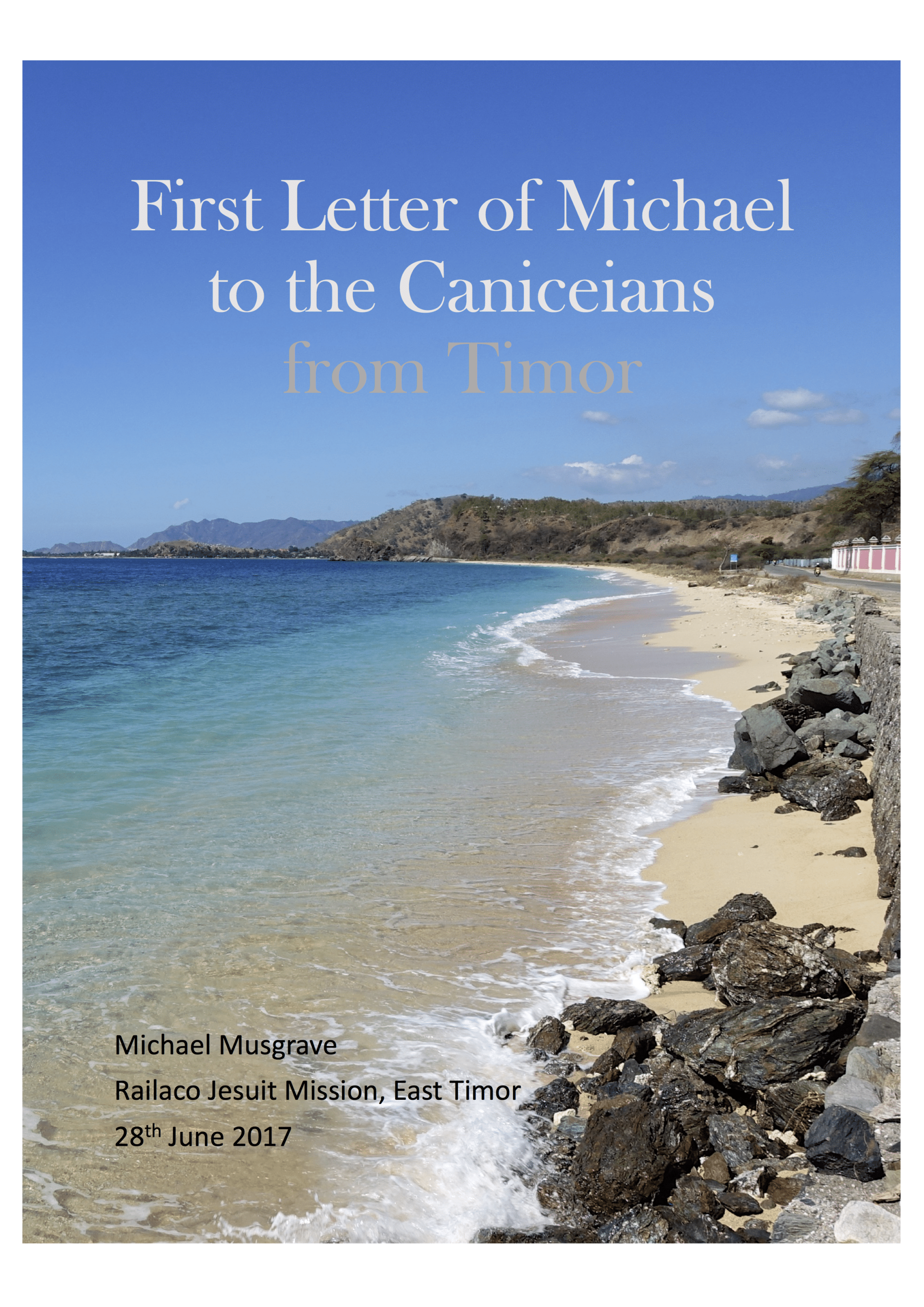 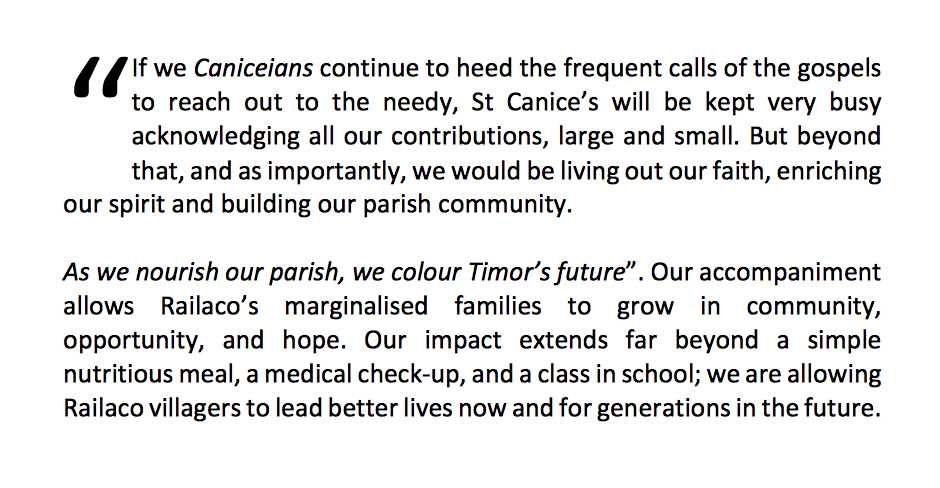 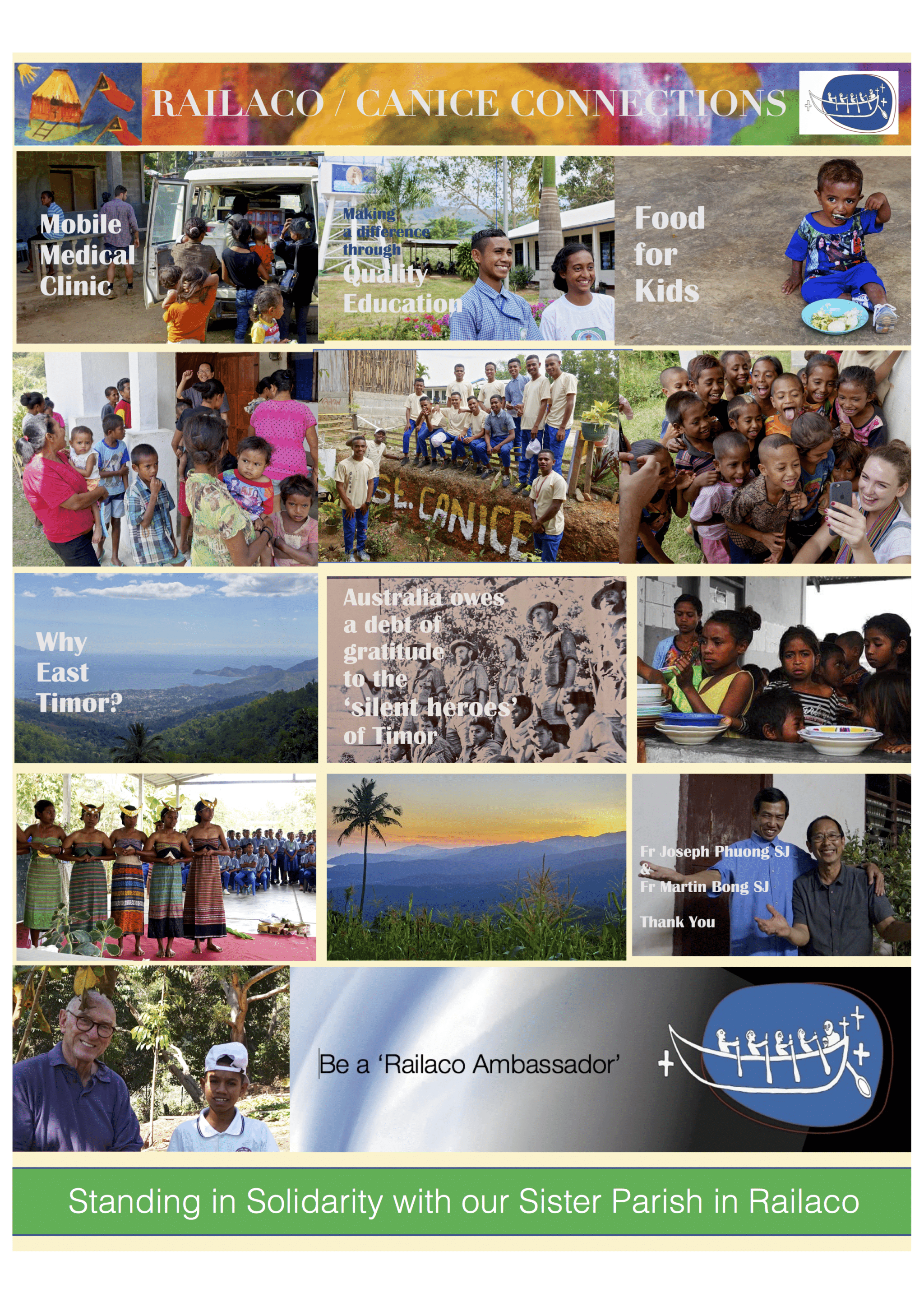 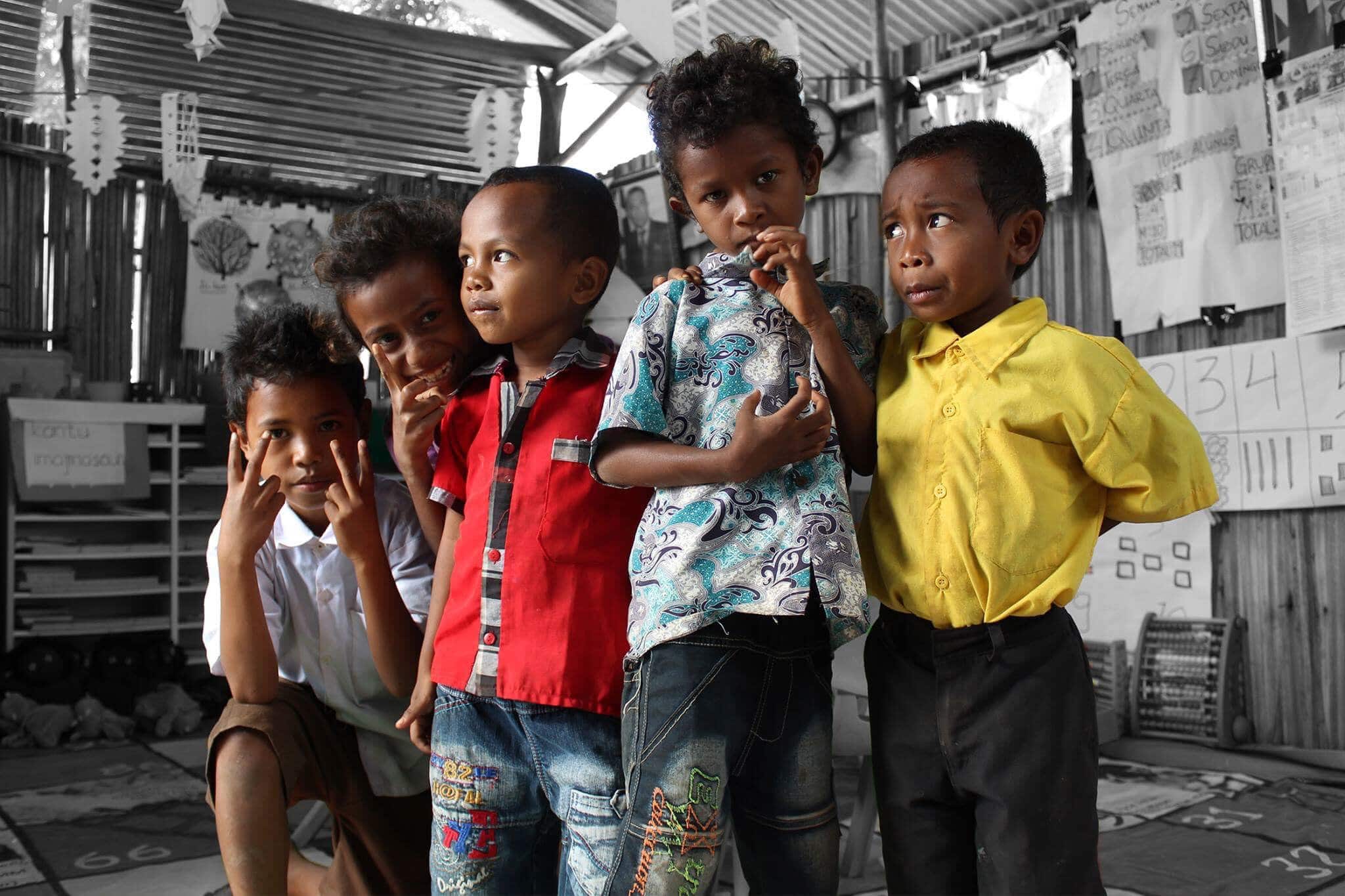 2013 – Video sharing the Genesis of the St Canice/Railaco relationship 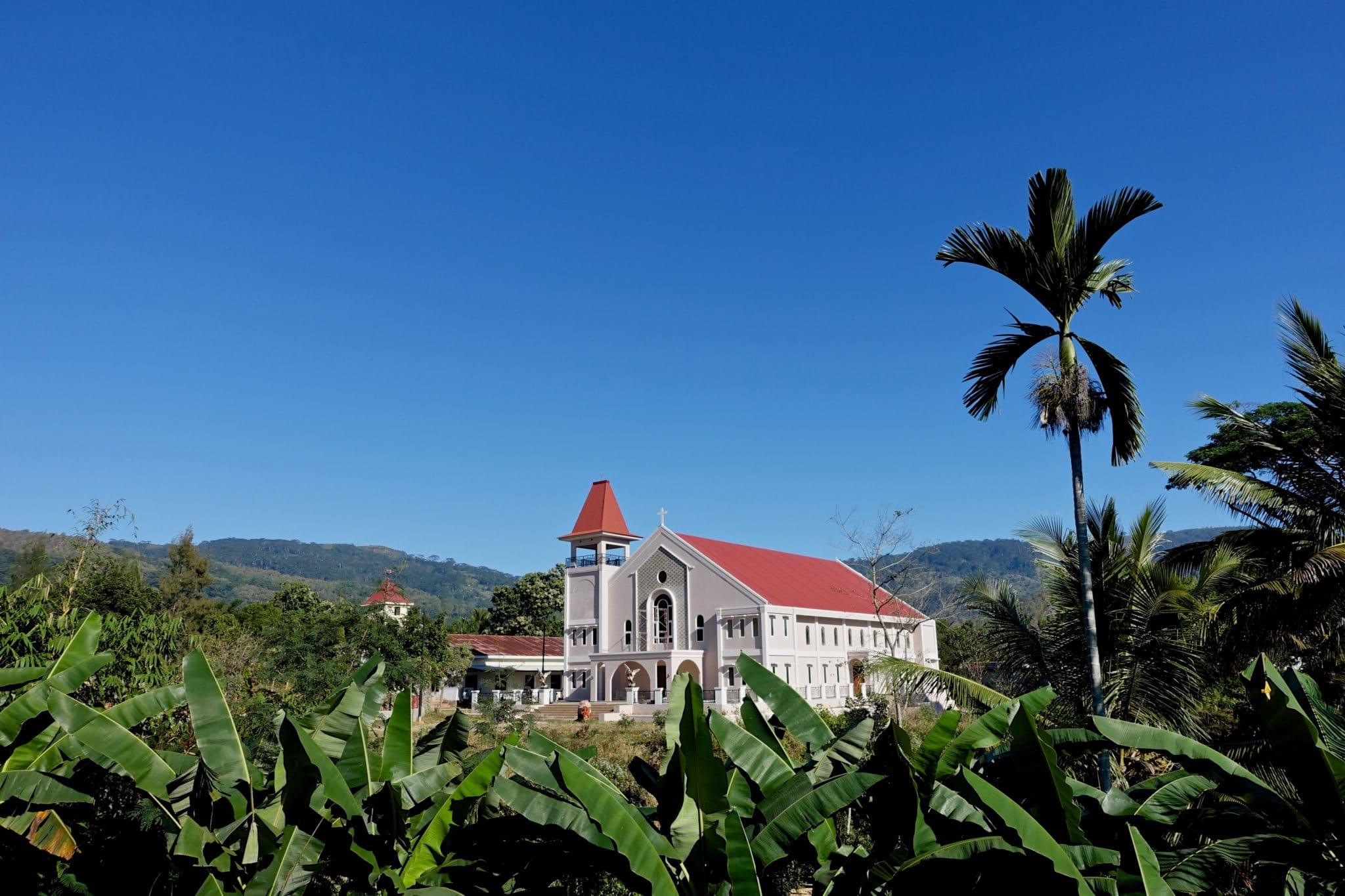 The new Railaco Parish church of Our Lady of Fatima is to be blessed and opened by the Bishop of Dili, His Lordship Bishop Virgilio do Carmo da Silva on October 7th this year to welcome the increasing numbers of people coming to Mass.The old church seen in the background will be used for much-needed parish Community activities.

The Report was introduced to the parishioners of St Canice’s at all Masses on the weekend of 15 and 16 July.
Click here to read Michael’s address. 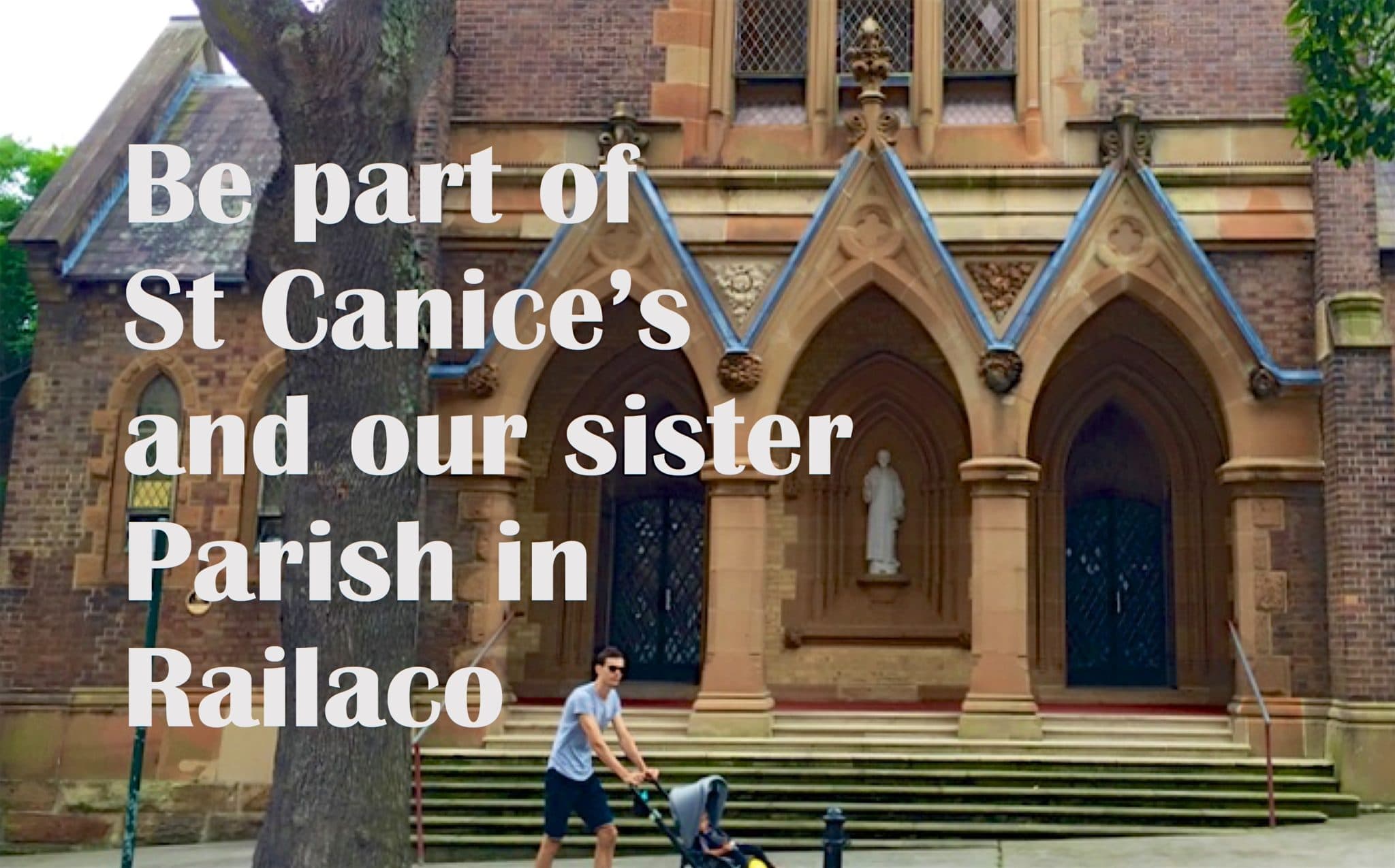 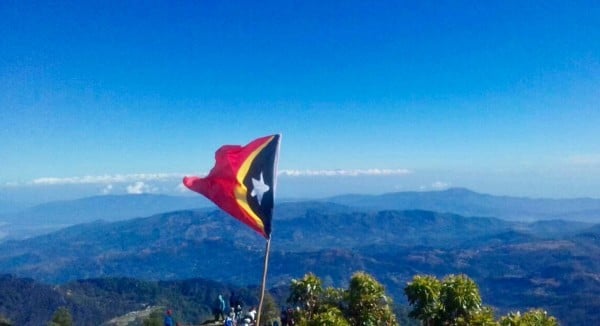