St Canice’s early history coincided with ‘the Irish
Phase’ of our Sydney Catholic story – which began in September 1884 when the man who would become our first Cardinal, the Irish Patrick Moran, reached the city. 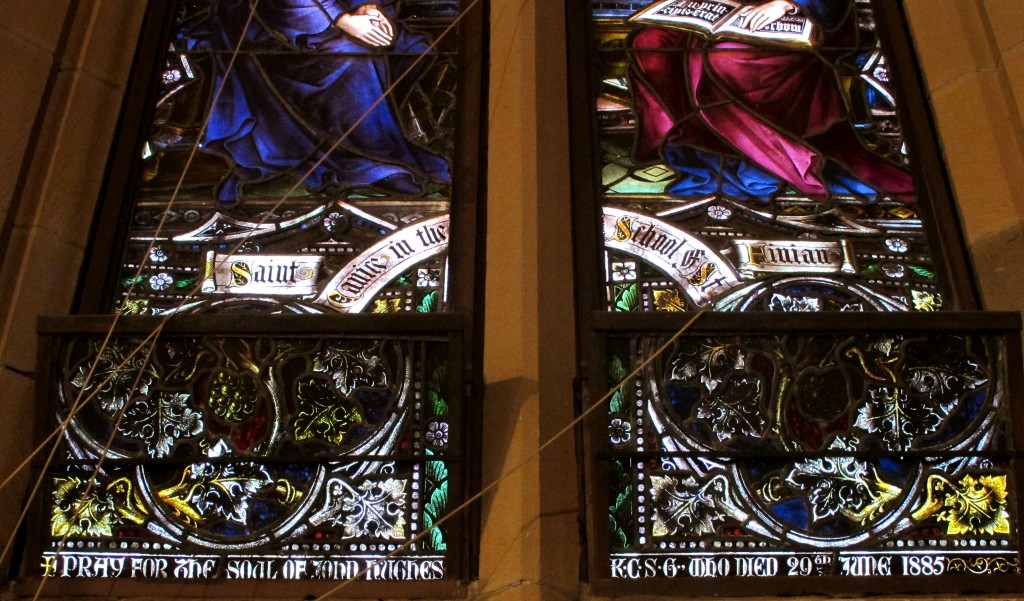 Here is an article from the Sydney Morning Herald from May 6, 1889:

The old church of the Sacred Heart, Darlinghurst,
having become much too small for the accommodation
of the Roman Catholics of the district, the erection of
a new church in Roslyn-street, near Rushcutters Bay,
was entered upon considerably over a year ago and
yesterday the opening of the now edifice handsome
and commodious one took place.

The erection of the church which was at yesterday’s ceremony dedicated
to St Canice, has been an expensive undertaking,
amounting in all to about £13 000 , but owing to the
generosity of a deceased benefactor, the late Mr John
Hughes, of Elizabeth Bay, and the subsequent dona-
tions by the members of his family, the cost to the
parishioners was, it is stated reduced to £5270 The
late Mr Hughes gave the site, a donation amounting
in value to £3500, and the members of his family have
defrayed half the total cost of the building.

In design the new church is Early English,
and the treatment of the front is somewhat
of a departure from the general architectural
characteristics of the Roman Catholic Churches of
Sydney and the suburbs. The building is of brick,
with stone freely and effectively used. The total
length is about 120ft, and the width, including the
aisles. 61 ft A bright appearance is given to the in-
terior by the cream-coloured bricks of the walls and the
Pyrmont stone in the pillars supporting the arches while
the lofty roof is of pine stained and oiled The design
of the sanctuary simple, but extremely chaste, and when
stained windows replace the present temporary ones
the effect of the toning down of light will doubtless
enhance its appearance.

A special feature in the furnishing of the church is the elegant white marble
altar in what is known ae “the Lady Chapel ” This
altar was specially executed according to the architect’s
designs by Signor Fontana the well-known Italian
Sculptor Mr John B Barlow designed the church
and superintended its erection, the contracts for the
basement and retaining wall were let to Mr John
Mahoney, and the contracts for the brick and stone work
to Mr A B Proud , Mr A J Waterson earned out
the remaining contracts for the finishing trades In the
basement of the building a large hall is provided, the
measurements of which are 90ft in length by 41ft in
width.

Cardinal MORAN, assisted by the Very Rev Dr.
Carroll, V G , parish priest of the Sacred Heart dis-
trict, performed the ceremony of blessing and opening
the building at half-past 10 o’clock, and High Mass
followed immediately The Verv Rev Monsignor
Verdon, of St Patrick’s Seminary, Manly, was the
celebrant of the mass. The Very Rev Dr
Murphy (the deacon), and the Rev James Walsh (sub
deacon). Besides the officiating clergy the Very Rev
Dr O Brien (rector of St John’s College), the Very
Rev Dr O’Haran, the Very Rev P Slattery,
O S F (superior of the Franciscans), and the Rev D.
M’Carthy, were present in the sanctuary.

The music was supplied by the choir of the Sacred Heart Church,
assisted by other choir singers. The musical service
consisted of ” Haydn’s Second Mass,” with the exception of the “Credo,” which was from the “Imperial
Mass ” of the same composer, Zingarelli’s ” Laúdate ”
(tenor solo and chorus) at the Collection,
and the Halleluiah Chorus from the ” Messiah ”
Mr. E W O’Sullivan conducted, and sang the
principal bass solos as well, and the other soloists were
-Mrs Harkness, Mrs J I Hunt, Mrs Field
(soprani), Miss O’Sullivan and Miss L Healy (con
tralti), Mr M’Carthy, Mr M’Quaile and Mr Gunning
(tenori), Mr Laws, Mr O’Brien, and Mr M’JN amorra
(basai) The “Laudata” solo was taken by Mr
M’Carthy Miss A Healy, late of St Benedict’»,
played the organ accompaniments throughout.

The very Rey Dr O’Brien was the preacher, and after treat-
ing the Gospel of the day on which he based his discourse,
the very rev gentleman offered his congratulations to
the parishioners on the completion of their beautiful
Church. Reference was made to the selection made m
dedicating the church to St Canice, and it was pointed
out that the parishoners had made a happy choice for
the name of the saint who lived and worked in the
sixth century was one of the brightest and most
honoured in Ireland’s head-roll of saints and Christian
heroes, and one whose festival was kept throughout the
world.

After mass the Very Rev Dr. Carroll read a state-
ment of accounts, which showed that the present in-
debtedness of the parish at the bank in connection with
St Canice’s was £4430. The amount of the day’s offer-
tory was announced as £149 7p. Dr Carroll referred
to the generosity of the special benefactors, by whose
donations the parishioners had been relieved of the
greater part of the expense of building the church He
expressed the hope that the generosity of their late bene-
factor and his family would over be held by the parish-
ioners in grateful remembrance.

Cardinal Moran, who is suffering from a severe cold,
was obliged to leave the church yesterday before the
proceedings closed The Cardinal, it was expected,
would address the congregation