Three of us from St Canice’s, Fr Steve Sinn, Duncan Campbell and Michael Musgrave set out for the journey to visit our sister parish at the Railaco Jesuit Mission East Timor with an overnight stop in Darwin. We enjoyed local Barramundi with the Anglican Bishop of Darwin, an old friend of Fr Steve from St John’s in Darlinghurst. 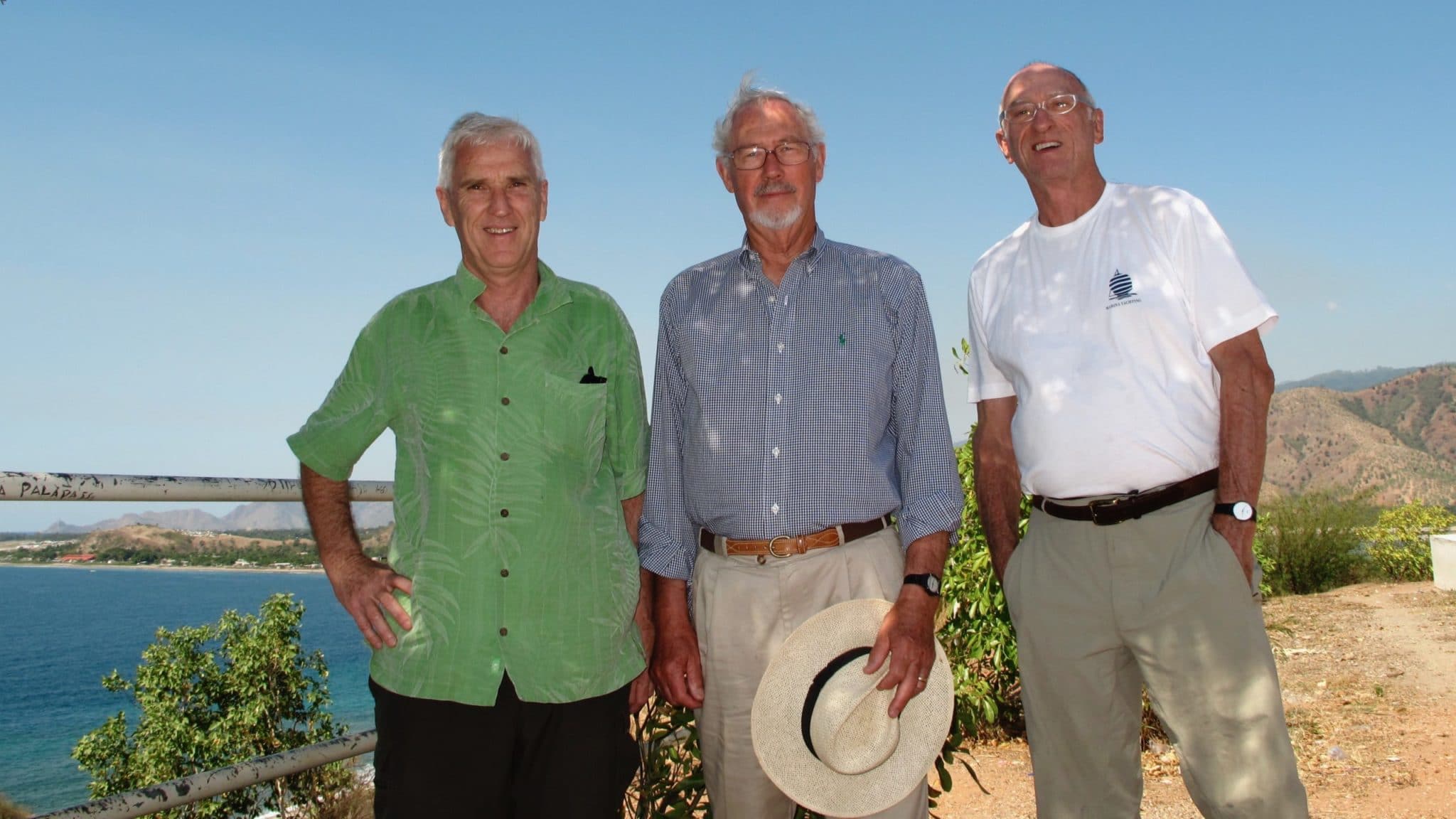 On our first morning in Railaco, we take off with Cristina and Judith to deliver a nutritious meal to children in the mountain villages of Cocoa and Cattarehei. I’m tantalised all the way over the rough roads by the smell of what’s swilling in the large pots. Bamboo and bananas give a touch of the tropics in what is very much a dry, Australian-type mountain landscape covered in Eucalyptus trees.

The warmth and welcome we receive on arrival at the little gathering place on the edge of a green playing area in Cattarehei is difficult to convey in words. Children in wide-eyed innocence and even wider smiles nod their head, bow and kiss the back of my hand as a sign of respect for their ‘elder’. The children’s ages range from eight months to nine years and they’ve come to rely on this food program three times a week. Children come with clean plates and spoons which Bong and others have taught them is better than using their hands.

Before dishing out the rice and chicken with beans, choko, carrots and potato in a soy liquid, the children sing for us. A worn-out mother of nine, but nonetheless impassioned, expresses her thanks for all that St Canice’s is doing for her children and for others who are there who do not have parents. The usual shyness seems to evaporate suddenly and all the children sing and clap for us! 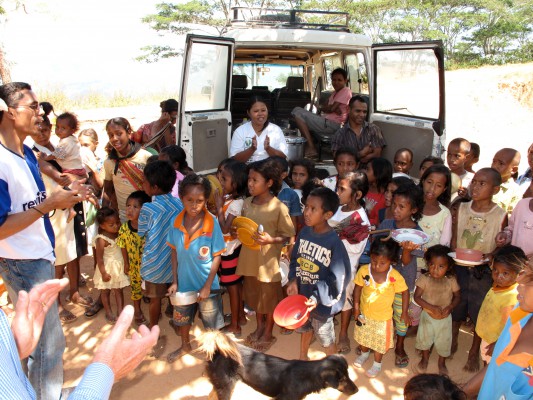 The sight of so many happy and well behaved kids of all ages lining up with tin plates in hand is very moving. They obviously love the meal served to them from the back of the 4WD. It is so touching to see some, as young as five, already with the responsibility for looking after a younger sibling, carrying and feeding the younger. Brother Dino was the hero when he showed them the new soccer ball and frisbee we brought along with us. Steve and Duncan gave the demonstration of throwing this weird-looking plastic disc and running all over the grass trying to catch it. The kids soon showed ‘em how.

Next stop was further along the mountain ridge to the village of Cocoa. Driving up a steep hill with the church perched on top and horn tooting to announce our arrival, children with their tin plates, plastic bowls and spoons come running from all directions. Father Sami explained yesterday that these Timorese people are ‘Austranesian’, a mix of people from Portugal, Macau, India and China, many with black kinky hair. 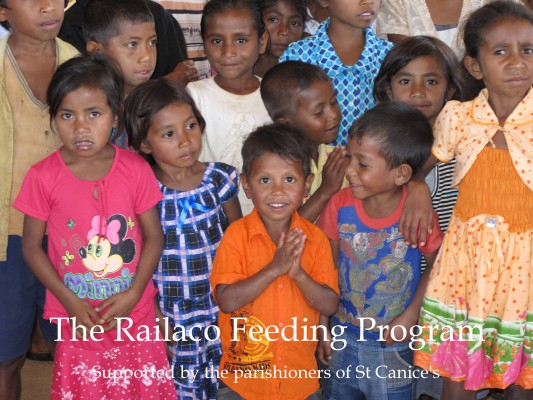 In this village, knowing that Father Steve was coming to pay a visit, savvy senior members of the local community come to meet him. Like a ‘Town Hall’ meeting they raise some very basic needs. ‘No water’ is the main issue. Here we have a village that is is so clean and tidy – but a bush fire has melted the PVC water line from further up the hill. They can articulate very well and know exactly where they would take water, and where they would locate a single tank for all to use. How can you refuse?

Water supply for essential use is still a challenge that is not being met by government up here in some villages in the mountains. Also, closer to home, our Health Clinic and Secondary school at Railaco still have need for a piped, ‘continuous’ running water supply. Our water is piped from a stream higher up and held in a tank. When Sister Rita tells me there are times that she can’t allow the 200 students to come to school because there is no water for the toilets. God help us!

The Railaco ‘Feeding Program’ for 80 children is produced at a cost of just $400 a month. Amateurs like Duncan and I can’t see why funding can’t be found to make this a daily meal, and also to improve it with better quality ingredients and perhaps more nutrition.

Our special thanks has to go to the untiring workers who make the food and deliver it across such rough terrain. Their smiles are nearly as big as the kids receiving the meals. In turn, they are very grateful to the parishioners of St Canice’s. Let’s keep it up.

Mild-mannered Father Bong was educated in a Jesuit High School in the Philippines but followed a friend into the Dominican Medical University. On graduating, his need ‘for service’ saw him join the Jesuits again and become a priest. 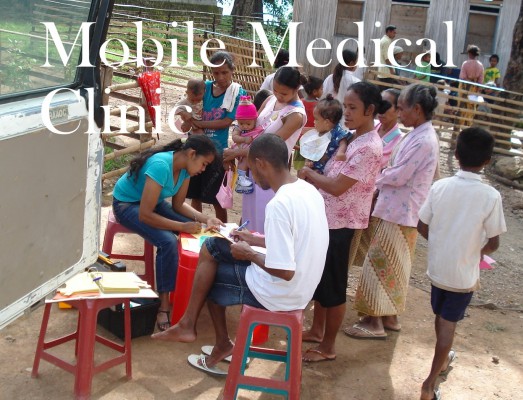 Bong has been running the Jesuit Railaco Mission since 2004 and in addition to his pastoral duties, he serves nine remote areas in the mountains with a mobile medical clinic. The average family has 8-10 children and the rate of infant mortality and morbidity is high. During the Indonesian oppression, the church was their only refuge. Such a strong bond and trust remains.

In Railaco itself, St Canice’s supports a secondary school of 200 students. This number is growing. Children walk up to 2 hours each day, morning and night to attend school. Some students who are in their 20’s are taking the opportunity to finish their interrupted education. 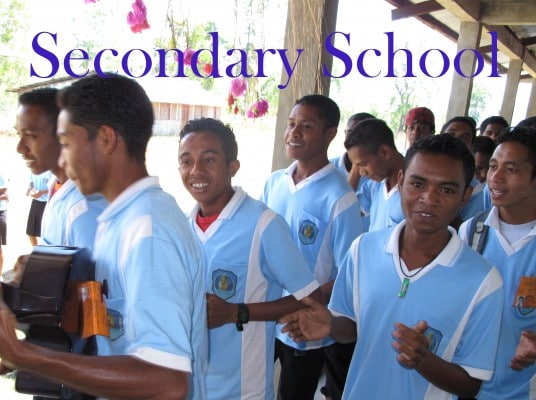 Sister Rita, an AFL and Cricket-mad Australian is a retired secondary school principal from the Order of the Sisters of the Good Samaritan. She runs the school with a staff of local Timorese teachers. Recently, Brother Dino, a 7th year Jesuit in training has been appointed for two years to run the English language Club and to teach Religion. We visited on the last day of the Public exams for 60 final year students and were royally welcomed with procession and singing.

On the following day, Sister Rita devoted the full day to interviewing 77 graduating students from the surrounding areas who wanted to lodge applications for university scholarships. Regretably, funding and places are limited. So many will move to Dili to seek improvement but they risk becoming impatient, frustrated and even angry. There are so few jobs let alone places in University. The young people are also aware that the country is sitting on massive oil reserves, none of which appears to be filtering down to the benefit of the people. This is a potential trigger for trouble. 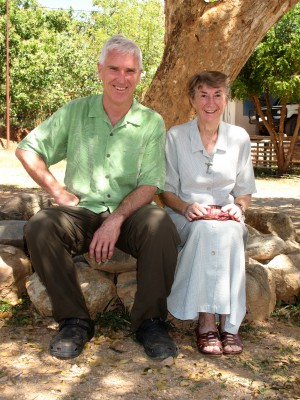 Many graduates aspire to office jobs because they see that as ‘status’ (The Portuguese colonisers were all sitting in an office!) A greater awareness of trades and other jobs would alleviate the issue. In many countries, the tourism industry is a major employer, but wider range tourism remains a long way off in Timor-Leste until essential infrastructure – hotels, transportation, roads, toilets at beaches etc improve.

Thankfully, Jesuits working on the frontiers are trustworthy and use every dollar caringly. Thank you for your ongoing generosity.