The Red Cross on our Logo

The appearance of a red ‘cross’ on the logo of our updated parish web page is an artistic touch to add to the conceptual image of Christians rowing across the water on a spiritual voyage that all Christians must take;

Or it can be interpreted as Christ on the sea of Galilee with the apostles.

The red cross in our logo symbolises the heart of Christ, the life force of our parish. He comes to us across the waters in our darkest hours, as he did for his disciples, worn out with rowing and buffeted by wind and waves. (Matthew 14:22-27)

Service, protection, and shelter, is the mission of St Canice on the troubled waters of the world.

Since at least early mediaeval times the sign of the Red Cross (eg the Templars) was the recognisable sign of service, protection and shelter. That concept has continued in the c20th Red Cross organisation also.

St. Canice was a friend of the famous St. Columba, who founded his great seat of learning at the island of Iona off the western coast of Scotland, where Canice visited and helped him.

A famous story depicted in the stained-glass window of St. Canice’s Church in Sydney, tells how Canice saved Columba and his men from a storm at sea by his prayers. 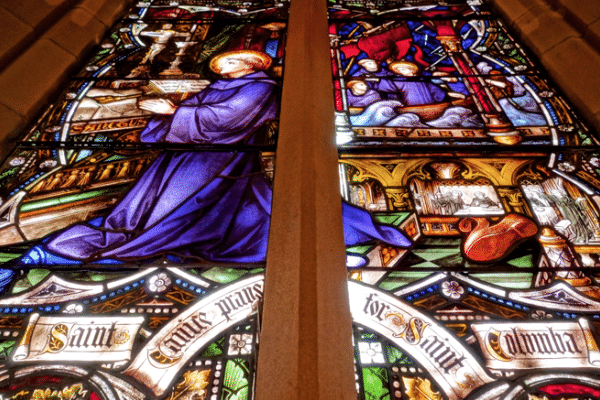 The stained-glass window behind the main altar at St Canice’s shows St Canice praying while St Columba and the monks are being tossed on stormy seas. It even depicts the one lost shoe of St Canice that we hear about in the story. It incorporates so beautifully the motif of the curragh and the waves that threatened it. They daily remind us of the power of Canice’s prayer.

One day, as Canice was eating, he heard in his heart the voice of Columba, who at that moment was aboard a ship foundering in a storm at sea. Canice thereupon ran to the chapel so hastily that he lost one shoe. As Canice knelt to pray for his friend, miles away Columba watched the churning sea around him suddenly subside.  Having seen in a vision Canice’s dash to the chapel, Columba thanked him in his heart, saying, “Your swift course to the church with one shoe exceedingly assists us.”

Irish monks in a curragh is certainly a sight that would have been familiar to St Canice.