Sharing the Story of our Parish in the First World War

We at St Canice’s can uniquely commemorate the Centenary of the First World War through the stories of five descendants of our benefactor, John Hughes, who lost their lives in the War. The stories are in this online booklet, written by parish historian Kevin Walsh.

It is a hundred years since St Canice’s, (then just twenty-five years-old in 1914), began seeing some of its members going off to war.

We of the later generations have been presented daily with messages about the impact of that war and how the challenge was handled, through four striking windows in the transept of our church. These windows, installed around 1920, are in a notably beautiful area of St Canice’s, which today, creatively, carries relics of our own dead.

The stories the windows tell are somewhat muted, for a couple of reasons. My aim here is simply to decipher a little of what is in those messages – to share with the St Canice community as we, and our nation, pause to commemorate the centenary of Gallipoli and the sacrifice of those who served in the First World War.

Copies will be available in print shortly. 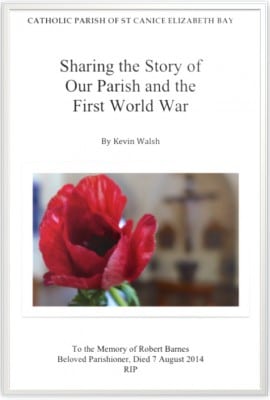