Sit in a chair. Close your eyes. Listen. The powerful message of this homily is better heard in the listening than in reading.

To some, the homily may start out sounding a little ‘dry and Christian’, but a few minutes in, Fr Frank recites a poem, ‘And a Good Friday was had by All’, by the famous Queensland poet Bruce Dore, who died last week. The poem brings the meaning of Holy Week alarmingly to life in our own vernacular.

Fr Frank then goes on to relate a story from a book with such potent parallels to these times with Covid-19  – ‘The Plague’  by Albert Camus.

In all, he combines what is a very important gospel reading for Christians at this time of year, with a masterful adaptation to our life and issues that we are all facing as one humanity today. 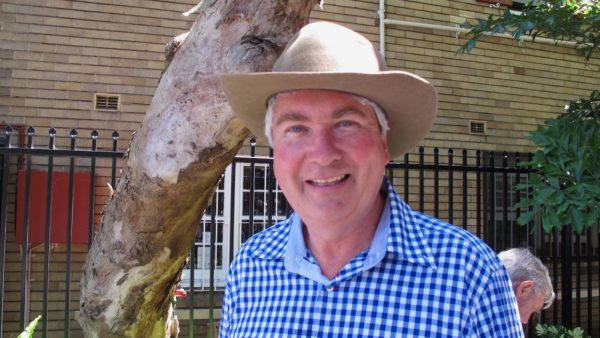 We are commencing our Holy Week which is one like no other that any of us have ever celebrated. Today, there is no processing with palms as we have done every other year. Watching events in New York and northern Italy, we are bracing ourselves for the spectacle of people dying alone, loved ones being unable to touch their departing ones, and mourners being unable to gather for funerals. It’s no surprise that in this year’s reading of Matthew’s passion we have a heightened awareness of Jesus’ absolute aloneness as he faces his passion and death having entered Jerusalem just a few days before with crowds jubilant around him exclaiming, ‘Hosanna to the Son of David’.

Consider those last words on the cross: ‘My God, my God, why have you deserted me?’ He’s been sold out by Judas – for thirty pieces of silver. He’s been abandoned by his three closest disciples in the garden of Gethsemane; they sleep while Jesus prays three times to the Father that he not be put to the test and that the cup might pass him by. Jesus does not hear any response from the Father. Even on the cross, neither of the two thieves speaks to him, as one does in Luke’s gospel. In Matthew’s gospel, he’s on his own, every step of the way. And its left to a non-believing centurion to make the declaration, ‘In truth this was a son of God’, while some of his faithful women friends look on from a distance.

Our most grounded, accessible, and humane Australian poet Bruce Dawe died this week. Bruce was a teacher at my boarding school in Toowoomba in the 1960s. He wrote the foreword of my first book. Contemplating Jesus absolute aloneness and the centurion’s statement, ‘In truth this was a son of God’, I have always been inspired by Bruce’s poem:

And a Good Friday Was Had by All

You men there, keep those women back
and God Almighty he laid down
on the crossed timber and old Silenus
my offsider looked at me as if to say
nice work for soldiers, your mind’s not your own
once you sign that dotted line Ave Caesar
and all that malarkey Imperator Rex

well this Nazarene
didn’t make it any easier
really-not like the ones
who kick up a fuss so you can
do your block and take it out on them
Silenus
held the spikes steady and I let fly
with the sledge-hammer, not looking
on the downswing trying hard not to hear
over the women’s wailing the bones give way
the iron shocking the dumb wood.

During these days of isolation, awaiting the avalanche of suffering and death which is probably ahead of us, I have been re-reading Albert Camus’ The Plague which was on my first-year literature syllabus about 50 years ago after leaving school in Toowoomba. Back then, I never thought that I and my fellow undergraduates would need to prepare for our own variant on the plague. Camus writes of a plague in the Algerian town of Oran just after World War II. The narrator turns out to be Dr Rieux, the town doctor who first noted the dying rats, twigging how devastating all this could be.

In the town, there is a Jesuit priest, Fr Paneloux who ‘had previously distinguished himself by his frequent contributions to the bulletin of the Geographical Society of Oran’. He’d also given a series of lectures on modern individualism. ‘Here he had warmly defended a demanding form of Christianity which rejected both modern liberalism and the obscurantism of previous centuries.’ Just my style of Jesuit!

As the town braced for the plague, the church was packed, and Fr Paneloux was advertised as the preacher. Dr Rieux is not much given to religion, but he goes along out of curiosity and in solidarity with the townsfolk, if nothing else. He reports that ‘the sermon made some people more receptive to the notion – which had remained vague up to then- that they were condemned for some unknown crime to an unimaginable term of imprisonment.’ Paneloux was trying to make sense of all this pending suffering and evil under the watchful eye of a loving God. Perhaps the people were being punished for their infidelity to God.

As the plague takes hold, Fr Paneloux steps up to the plate, volunteering to assist however he can around the hospital. He and the other volunteers are injected with an untried serum and set about their tasks. Being a priest, ‘he had seen death many times. And though in theory he was protected by the serum, the idea of his own death was familiar to him.’

But then he spends many hours watching over a dying child. After the child’s death, the doctor notes that the priest is in some way changed. Fr Paneloux is then to deliver another sermon and he is keen that Dr Rieux attend. Rieux goes along and notes: ‘He spoke in a voice that was softer and more thoughtful than the previous occasion; and several times the listeners noticed a sort of hesitation in his delivery. Another peculiar thing: he no longer said “you”, but “we”.’

It had been easy for the priest in his first sermon to be clear and judgmental, telling the people about their relationship with God or what it ought be. Having experienced and reflected on the death of this one child putting a human face on the enormity of all the suffering in the town, Fr Paneloux comes to see that he is indeed one of the people. The people see that he is ‘one of us’. This Passion Sunday, almost like no other, we see that Jesus in his abandonment and aloneness is one of us, the one who in truth is a son of God.

At the end of the mass, Dr Rieux walks out of the church and overhears a conversation between an old priest and a young deacon reflecting on the sermon. The old priest ‘paid tribute to Paneloux’s eloquence, but was worried about the audacity of the priest’s ideas. He considered that this sermon betrayed more uneasiness than strength and at Paneloux’s age a priest does not have the right to be uneasy.’ Perhaps all of us have not just the right but also the duty to be uneasy at this time.

When Fr Paneloux is laid low, he prohibits the landlady from calling the doctor. But ultimately she does. Rieux comes to his bedside offering friendship and company, as both know that the end is nigh. Fr Paneloux says, ‘Thank you. But priests have no friends. They have given everything to God.’ Jesus gave everything to God that night in the garden of Gethsemane when he was alone unto death. It was the women at a distance at the crucifixion who were his friends. In John’s gospel, Jesus declares, ‘You are my friends, if you do what I command you’, and ‘I call you friends because I have made known to you everything I have learnt from my Father.’

Contemplating those last words of the one who was a son of God, ‘My God, my God why have you deserted me?’, let’s conclude with Camus’ last paragraph in The Plague when the lockdown and isolation is over and when life is ready to return to normal:

‘As he listened to the cries of joy that rose above the town, Dr Rieux recalled that this joy was always under threat. He knew that this happy crowd was unaware of something that one can read in books, which is that the plague bacillus never dies or vanishes entirely, that it can remain dormant for dozens of years in furniture or clothing, that it waits patiently in bedrooms, cellars, trunks, handkerchiefs and old papers, and that perhaps the day will come when, for the instruction or misfortune of mankind, the plague will rouse its rats and send them to die in some well-contented city.’

Whatever instruction or misfortune awaits us, whatever our uncertainties, let’s remember that we have one sure anchor and one true north in the present turbulence: the Jesus in procession on the first Palm Sunday, the Jesus in the garden, and the Jesus on the cross was and is one of us. And he was, is and always will be a son of God. God is with us. Let’s make our way to Jerusalem spreading our branches and garments on the road for the one who comes in the name of the Lord.