mmus2022-06-03T15:26:15+10:00
Long-time St Canice’s parishioner, Sir Gerard Brennan, the former Chief Justice of the High Court, died in Sydney on Wednesday. He was 94. When it came to St Canices, the humble man preferred that we drop the honorific, Sir.
He was Gerard Brennan, parishioner.
We extend our sincere condolences to all of Gerard‘s family in particular to Fr Frank Brennan SJ, who has been a major part of our parish for many years. 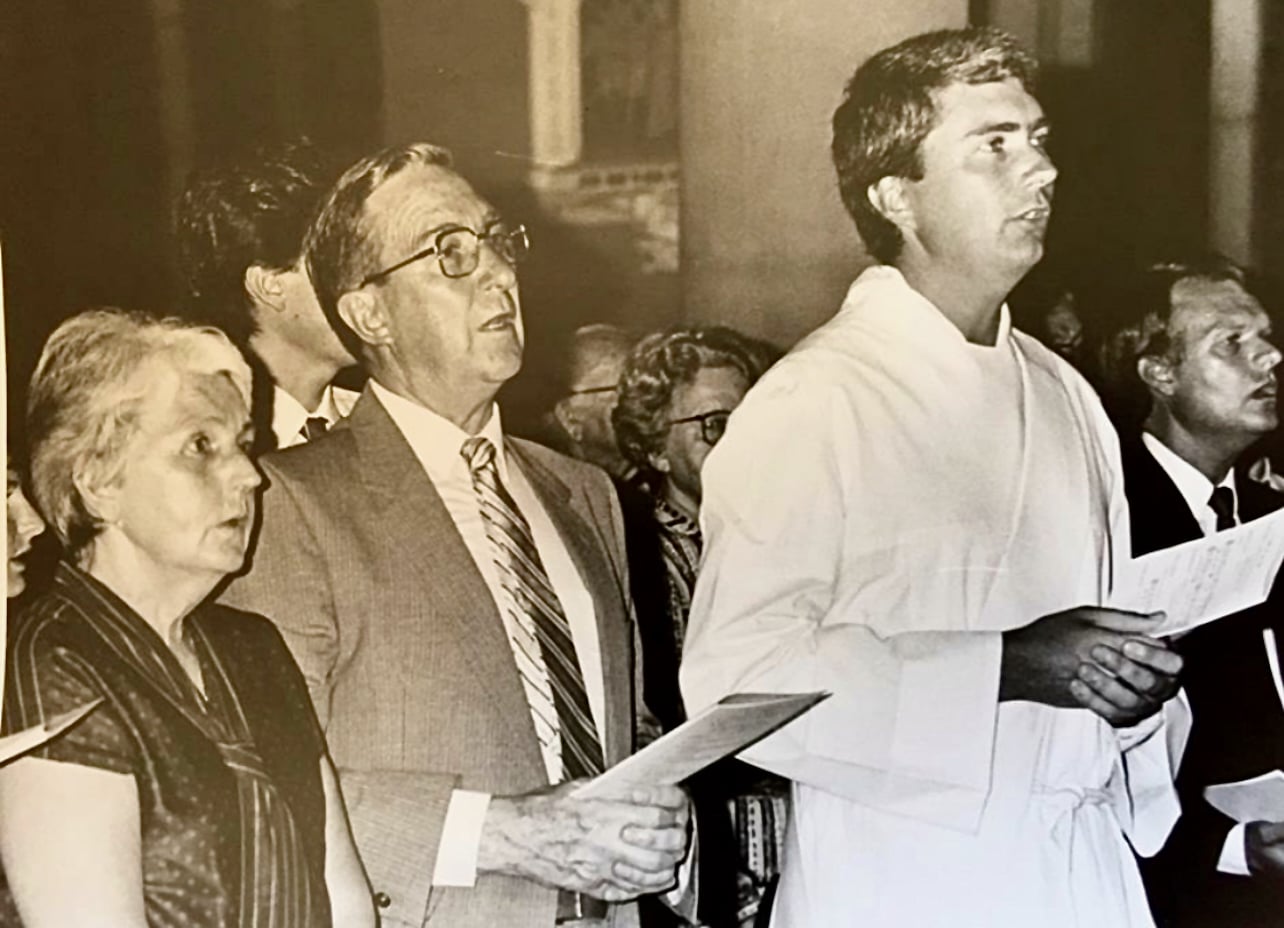 As a judge of the High Court of Australia in 1992, Sir Gerard wrote the lead judgment in the case of Mabo v Queensland, which abolished the notion of terra nullius and laid down forever the notion of prior Aboriginal occupation of Australian land.
.

As a parishioner of St Canice’s in 2011, Gerard spoke about our parish in an address, “Who we Are” that we will never forget.  As a tribute to him, we share it here again.
Rest in peace. 

“After Vatican II, we were challenged to find a deeper meaning to our faith. The scriptures and the two great commandments – to love God and neighbour – were given a new vitality. We come to St Canice’s to answer these challenges, to be supported by others who are on the same journey and to be encouraged when we fail. We give thanks for one another and for the comfort of being pilgrims together.
Meditation and the study of the scriptures strengthen the spiritual life of the parish. We are proud of our recently refurbished church and its surrounds but, more importantly, we are proud of the variety of people who make up the church that we know. St Canice’s extends its welcome to all – to the lonely people of the street and to the comfortable middle class, to the transvestites and the fashionistas, to the public figures and the unknown, to the hungry and the well fed, to the devout and the doubtful.
There is openness in our parish life, welcoming the refugees, feeding the hungry and clothing the naked. Canice’s Kitchen offers both food and hospitality and if the sounds of the assembled guests are wafted through the windows of the church, they are an authentic hymn of praise to Him Who ate with Matthew and other tax collectors and sinners.
St Canice’s is a parish but it is not parochial. One of the benefits that we receive from the Jesuits is an opportunity to participate in the work of Jesuit Missions and the Jesuit Refugee Service. Whether it is the hunger of the people of East Africa, or the plight of refugees in the camps of Thailand or Villawood, we offer our prayers and practical assistance thankful for the benefits of living in a free and peaceful country. Our parishioners have been closely involved in our sister parish in Railaco, rejoicing in the rebuilding of a community devastated by conflict.
The ecumenical spirit has grown as we formed relationships with other Christian communities in our area. Each year on Good Friday Christians of all denominations join in a procession of witness through the Cross to the Sacred Heart Hospice, praying on the way that all may be one.“
In all, St Canice’s is unique, a very inclusive parish, in the Ignatian tradition.
We acknowledge the Gadigal people, the traditional custodians on whose land this church was built.
We are Christians who have only recently inhabited this area and named it Elizabeth Bay and Kings Cross. For 130 years we have sought and found the living God in word and sacrament and one another. We are human beings who need saving and the forgiveness that comes from the love of God in Jesus. All of us – the rich and the poor, the happy and the sad, the defensive and the enquirers, the peace makers and the dividers, the hard of heart and the compassionate – have been given life and hope and faith and love beyond our dreams and we want to share what we have been given. 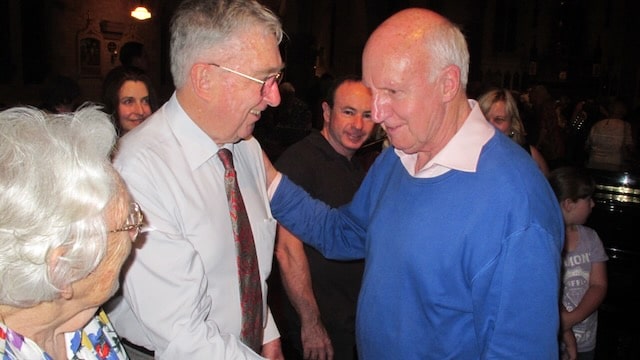 On another important occasion for our parish, Gerard wrote and delivered another beautiful and fitting Address:

Today we give thanks for the 125 years of service, both spiritual and practical, given by the parish of St Canice.

We remember in our prayers the generosity and devotion of the founders and those who have maintained the parish since its foundation. Now we must ask ourselves whether the parish of today remains as relevant to the lives of the people as did the parishes of years gone by. Pope Francis addressed to that question in Evangelii gaudium. He said:

“The parish is not an outdated institution; precisely because it possesses great flexibility, it can assume quite different contours depending on the openness and missionary creativity of the pastor and the community. … [I]f the parish proves capable of self-renewal and constant adaptivity, it continues to be “the Church living in the midst of the homes of her sons and daughters”. This presumes that it really is in contact with the homes and the lives of its people, and does not become a useless structure out of touch with people or a self-absorbed group made up of a chosen few. The parish is the presence of the Church in a given territory, an environment for hearing God’s word, for growth in the Christian life, for dialogue, proclamation, charitable outreach, worship and celebration. … It is … a centre of constant missionary outreach. We must admit, though, that the call to review and renew our parishes has not yet sufficed to bring them nearer to people, to make them environments of living communion and participation, and to make them completely mission-oriented.”

Older Catholics may tend to hear this as a nostalgic call to return to parish life as it was, in earlier and less pressured times, when the Catholic community was identifiable by the regularity of their church attendance, by bountiful priestly and religious vocations, public displays of Catholicity, lay dependence on clerical instruction, commitment to Catholic schools and hospitals and missionary endavours devoted to the proseletysing of non-Catholics. Then the Church was indeed living in the homes of those identified as her sons and daughters. But that is not what Pope Francis was speaking about.

Pope Francis is speaking post Vatican II which opened eyes, minds and hearts to the universality of Divine love and mercy, to the common humanity of every person, to their equal dignity and to their entitlement to a share in the world’s riches to sustain that dignity. Now, as in the past, the Church must live in the homes of her sons and daughters, but those homes are not confined to the ghettos of the past. As a parish, St Canice’s has been proud to welcome all who have chosen to worship here, but parishioners today are called to know, to respect, to care for – indeed, to love – all people. And that may impose on us, the parishioners of St Canice’s, a particular obligation towards all in the local community, the people who live on the streets and those who live in comfort, the people who work in boardrooms, in bars and in brothels, people who staff offices, hospitals and hotels; all who are our neighbours to be loved as ourselves. And then to recognize the world of poverty and need in other places.

It is for us, the parishioners in the pews, to ensure that our minds and hearts respond to Pope Francis’ call to make St Canice’s an “environment of living communion and participation and to make [it]completely mission- oriented”. That is our challenge for the years to come. 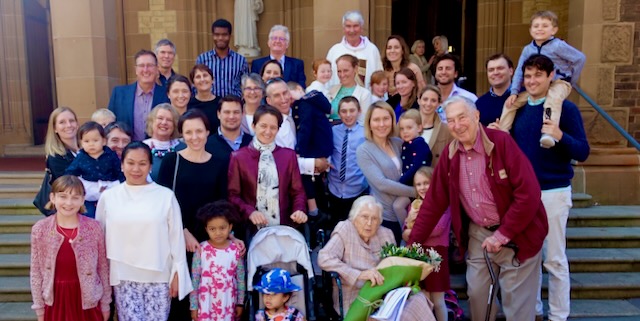